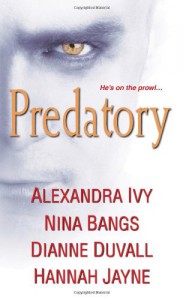 Typical. Purchased because it contained a vampire tale by Nina Bangs With that thought...

The first tale is by Alexandra Ivy. Ok, can we please call a moratorium on series entitled "Sentinels"? It's confusing. Thank you. The best way to explain this is to picture the X-Men, with sex. Add in the fact that PNR authors can't help themselves; they must add the whole mating impulse even when the person(s) in question are just humans who by bad luck happen to be psychic or something. Yeah...no. No, this just didn't work for me.

The second, by Nina Bangs, is NOT part of her Mackenzie/WooWoo series. It seems just...totally...random. Naturally, I was confused by this, because to a certain point, the descriptions of the vampires are identical, but then they veer off. So it's possible it IS part of the series, or ties in, or...but who knows. It reads almost like the set-up for a new series.

The third tale, by Dianne Duvall, I'm tempted to see if it is part of a series. Technically, both parties are vampires - they're infected by the same virus - but some humans are in possession of a unique gene that allows them to remain in control mentally.

The fourth tale, by Hannah Jayne, is part of a series but frankly, I didn't find it that interesting. I guess I've read too many female vampire fashionistas to really care.