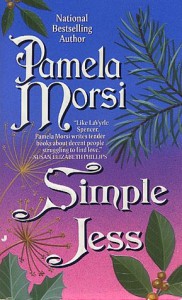 I'm reminded of Tropic Thunder, and Stiller's character who once was in a movie titled Simple Jack.  Fortunately, Jess is smarter than Jack (not hard really; Stiller played Jack)

This book, around fellow romance readers, is like, the holy grail or something.  People speak in reverence about it.  Why?  Because the H is ah...not exactly genius material.

I've already aired my complaint about how he's inconsistently portrayed in the set-up book.  He's called slow, simple, feebleminded, etc., yet is a brilliant musician.  Right.

My complaint with this - too many participants, and the plot is to blame for that.  The h's MIL is trying to bully her into marrying someone - of MIL's choosing, so she gets the town behind it, though the town refuses to let her do the choosing.  Translation - the h is being actively courted by two men, while Jess works her farm for her.  Yeah.  That's just so not right...  And one of the men is actually in love with the other man's sister.  The other man is apparently gay (he exclaimed without thinking, that Jess was beautiful.  Ooops)

And my other complaint is the darling child.  A lot of readers don't like children in their romances because authors seem to have difficulty portraying them realistically.  I have less issue with that than the haphazard parenting I see.  Here, the child's mother does things like oh, raise the bedpost and sit it on his shirt tail - to punish him for tantruming about not going on a hunting trip.  The child is 3.  Nobody with a brain would take him on one in the first place (one of the suiters invited him, dumbass).  Mom leaves the house(!!!!).  Of course the child escapes and takes off after the men.  Of course he just happens to be wearing a hat with a deer tail that any idiot should have known was a bad idea (the H did, but couldn't explain why).  Of course he almost gets shot.  (btw, I hated Old Yeller too, mostly because of that damned kid)

I liked the H.  I almost liked the h (though I thought the H was actually smarter than her).  The kid...would have gotten his britches dusted at least once.