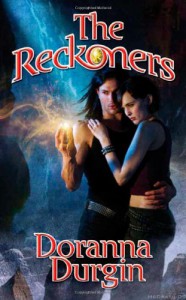 Hmm… Classified as a paranormal romance but really more of a UF.

Really interesting concept, although having the tune to Ghostbusters playing in my head from time to time was a bit… yeah.

So our h is a bit beyond "sensitive" in that she can make ghosts go away. And…the H rather insistently hires her to help him. Except…the H is not entirely human. Actually, he never says what he is, but he's a halfbreed of whatever it is that he is. Errr… something like that. And he has a familiar that is "not-cat".

So… they all eventually congregate (she has a team, though a former boyfriend refuses to participate in this one) at Winchester House, lots of things happen, some sort of rogue aliens are captured (though a few are killed), and he goes home. Book ends with his return as apparently the tribunal was not happy the aliens weren't captured in one piece.

Now… whether I'll read it again… probably not, though if a book 3 comes out, I will hunt it down (I peeked at the end of book 2 - he's captured and dragged home).