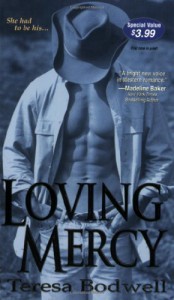 Ok, this book is set shortly after the Civil War. Keep that in mind.

There were a lot of things wrong with this, to the extent that even the (exceedingly rare) moments of humor could not redeem it. First off, take the heroine (take her! You must take her!!!) She's a self-absorbed, feminist, know-it-all with the sensitivity of a brick. Anachronistic? Heck yes!! She's a widow and she can't figure out why her wearing the pants in the family would have alienated her husband. D'oh. So that's her personality. Now let's get to other things...

So as I said, this was after the Civil War. You'd think there would be a few war widows running around. Instead, one is given the impression that nobody in the area took sides (yeah; right). And you'd think that a cattle ranch of any size would oh I dunno - have a few ranch hands and a foreman? As in, who is managing the ranch while she's on the cattle drive? Or rather, why is SHE on the cattle drive instead of a few hands and a foreman? Then there are the pants. I know women did occasionally wear pants then, I also know that some areas outlawed women wearing men's clothing. Yeah...

Distance - somewhere in Colorado territory to Abilene - which was in Colorado territory? Eh? Come again? I don't KNOW what year Texas became a state - would have to look it up - but am pretty sure Abilene was in whatever Texas was at the time. She, her kid sister (who is 19 by the way), and two hands she hired for the trip took a herd of cattle. Generic herd, mind you; no mention of them being steers (for an expert cattleperson by her own reckoning, that seems dumb), also she's wondering if she should have brought more. Uh... I thought it was customary to take every marketable steer to market at once; not just grab a handful for a month-long drive. Seems like an inefficient method of operation to me. And then there's the return trip. First, the two hands bug off, then she has a run-in with some low-life who has issues with women, so our H convinces her to (reluctantly, I might add) let him come along (which I find strange since she supposedly was his sister's best friend). And this trip supposedly will take nearly a month. Ok, with cows in tow, I can see it taking forever because they aren't going to move any faster than they have to, but endurance horses often do 50 miles in a few hours so why would it take so long to ride home? Even at a working trot, a horse should be able to cover quite a distance, and these were ranch horses so used to being ridden rather a lot. Does not compute.

Hero... been in war, doesn't want to talk about it. Wants to see sister, get married, start a family.

Sister - 19 and told by heroine that she's "too young" to start a family. Yeaaahhhh... I'm almost certain that many women were married off as young as 16 at the time.

Sister's beau - dingbat. He grew up on that side of the Mississippi and didn't know how to shoot? At all? Did they not hunt? Wasn't like there was a Kroger just around the corner. His defining moment - getting kneecapped by would-be robbers, thus forcing him to be left behind at the fort (following losing his lower leg) - to go back to Abilene and be a store clerk I guess. Sister stayed behind with him.

Bad guys... to be honest, I stopped prior to finding them out but... they attempted to lay waste to our party 2 hours out of the fort (what are they; nuts?). Suspect low-life woman hater is one of them (foreshadowing in the form of H thinking some suspected him of rustling cattle). Likely two cow hands were too.

Random bit - several thousand spent to import some Hereford bulls. No mention of how many, and they landed in Panama and were driven up through Mexico? Say whaaa?
Tweet
2441 BOOKS