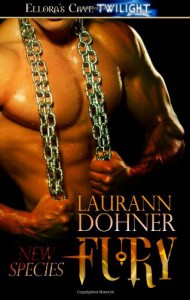 Hmmm... it would be nice if an author whose writing skills matched their imagination tackled this theme.

To be honest, I was somewhat confused on how they came to be. Were they true genetic experiments like the Breeds were, or were they stolen children who were experimented on? I am also perplexed as to why they're given healing drugs when injured - won't they heal up fine on their own?

For once, the females aren't portrayed as evile bitches - this author has a tendency of doing that to justify the males seeking human females. Bugs me, it does.

Actually, what kills it (besides the bit near the beginning where the H kidnaps her and coerces her to say "yes") is the dialog. It's all rambling and clunky (and repetitive at times). I mean; at least they aren't yelling, screaming, and cursing at each other (a nice change from that *other* series with this theme), but it's not really natural I guess.

The other thing - everyone convinced utterly that any minute now Fury is going to flip his switch and hurt her. This lead to a coitus interruptus event that I'd think actually would have hurt since he was err...tied? (he's canine - you figure it out). And it seems from the point he installed her in his house, someone was nearby ready to intervene (which was how that happened in the first place - she was...noisy), and yet, nobody paid any attention to her complaints about the nurse, but they were sure ready to try to hide her from him and try to restrain him themselves after the nurse drugged him.

I dunno. I looked through my stash and realized there are at least 6 books to this series, because I have another 5. Oh boy...