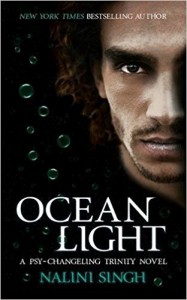 I had an uneasy feeling about it when confronted with the heroine's anti-human attitude. Fortunately, she got over it pretty quickly.

I... think maybe some of the issues some had with this was due to a new setting and completely new cast of characters. Sure we saw a few familiar faces but most seem to be new. OTOH, I didn't hear any complaints about Aiden's book - similarly isolated for a good part of the book. So I can only guess that since the book seemed to be almost entirely from Bowen's pov, that perhaps there wasn't a good enough feel for how everything worked. Or maybe BlackSea isn't that interesting to people. Who knows. I didn't mind. I did find it a bit bemusing that *both* the changelings working with the Dr were moles. That seems a bit of a stretch there.

re: gills - apparently *all* the aquatic changelings have them regardless of their alternate form, which leads to...how did Kaia almost drown when she shifted by accident after being caught in a net as a kid?

BTW, I hope Aiden the walrus doesn't get his own book. That would be a bit confusing.