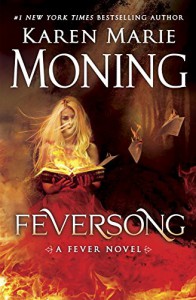 I didn't start on the Fever series until Iced came out - I found it at the local library and i used the due date as a reason to dig out the other 5 and read through them. They were easy to read, fascinating, engrossing... My daughter was reading them at the same time I was. At some point, she grabbed the next book before I could, and got ahead of me. Based on her brief intro to Dani there, she refused to read Iced. I did...and sort of wonder why I bothered really. It was uncomfortable for me (Ryodan was creepy), and the young Dani's contemptuous attitude towards everyone got on my last nerve. I was relieved that she wasn't the star of book 7. Books 7 and 8 though... I don't really remember much about them (was actually a little startled to realize this is book 9). Sad isn't it? My last memory I guess was the Sweeper.

While I got that the original 5 left things unfinished really, somewhere along the line, that spark died.

And now we have this one - a disjointed mess.

I really hate head hopping. The bouncing into Dani's past (those italics chapters), the sudden shifting into someone else's head (Ryodan once - no warning on that one.), spatzing from third person to first person, sometimes present, sometimes not. There's a story in here but the writing of it was not something I could follow without some strong booze, which I'm fresh out.

Random observations - Cruce survived too. Am I off-base to wonder if he didn't start out as human? Maybe an attempt to turn humans fae? And how long (and by long, I mean how long is this going to be drawn out? Because I'm almost to the point of not giving a shit) until there's resolution? Because clearly Mac doesn't know yet what she's doing, and he's in the king's lab, and the king has abdicated, and there's no king...yet. And I have High Voltage sitting here and I know it's mostly a Dani book so clearly not in anything currently published.