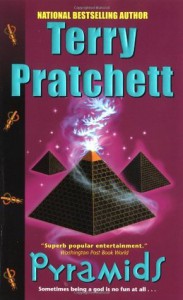 The trouble I guess with this is...well, we have this hero, who becomes the king. He's trained with the Assassins' Guild and...other than a few displays of his sneaking skills, we don't really see it. The chief priest pretty much runs the kingdom, as he has for the past 7000 years at least. You'd think the hero would demonstrate his skills on said priest for overruling him. But no...

Instead, it takes him essentially being railroaded into doing something his dad did not want - build a pyramid to bury him in - and apparently building it on a scale that it disrupted time badly.

See, the pyramids control time to some extent. This one just blew the kingdom into a pocket dimension. And well, with this event came a whole lot of other events that eventually led to the old priest getting blown back in time to start the cycle all over again... But no clue where he came from to start with.

And then the king abdicated and left the handmaiden who turned out to be his half sister in charge.