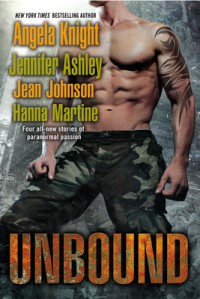 Typical anthology and glad I found it used. Hahah!

Tale the first: Angela Knight's finale to her time travel/cyborg series. Not sure how I feel about a series conclusion being a novella. Maybe slightly shortchanged here. There were issues, after all. Most of the issues revolved around why the Xeran outpost was in aridzona, why the Xeran "god" would be there, how they figured out what the thing actually was, and finally, what happened to Xerans everywhere else. There seemed to be a lot of 'splaining left out, skipped, etc.

Tale the second - and the reason I read the anthology now since I'm reading this series. Being a non-morning person, I had a lot of sympathy for Nell. I just wondered why she bothered to converse to the TOTAL STRANGER appearing in her kitchen at 5 fricken AM dismantling cabinets. She had a shotgun; why didn't she just shoot first, ask questions later? And I was v. aggravated with her decidedly inconsiderate sons who didn't seem to get that waking someone up like that was rude. Beyond that, the whole pushy aspect of it bugged the snot out of me.

Tale the third... Admittedly, Ms Johnson isn't a writer I follow as sometimes her attempts at realism go into areas that are just irritating. In this case, there was just enough info on the world to make me curious. Now whether I'll give in to that curiosity, I don't know.

Tale the fourth... was painful to read actually. They were from different social classes, and didn't want to admit to each other their attraction. At the same time, she was entirely too quick to assume he was using her. The world building was mildly interesting but doubt I'll pursue this one.